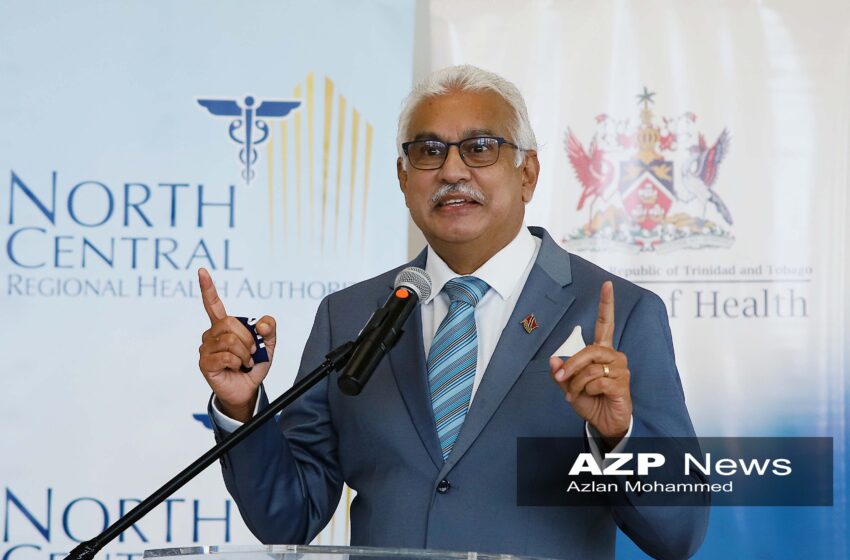 Deyalsingh: Persad-Bissessar Should not Hate T&T

By Prior Beharry  IF Opposition Leader Kamla Persad-Bissessar hates the People’s National Movement Government of Trinidad and Tobago, she should not hate its people. This was the statement of the Minister Terrence Deyalsingh at the virtual news conference of his ministry of Monday. He was responding to reports that Persad-Bissessar, a former prime minister of […]Read More

T&T in Talks with 5 Suppliers for Covid-19 Vaccines

By Prior Beharry SINCE October 1, 2020, Trinidad and Tobago has been in bilateral talks with five suppliers for Covid-19 vaccines. These companies are Pfizer, Oxford-AstraZeneca; Sinopharm, Moderna and Sanofi. This according to Chief Medical Officer Dr Roshan Parasram at the virtual presser of the Ministry of Health on Monday. He said the Health […]Read More

100 Health Workers the First to Get Covid-19 Vaccine in

By Prior Beharry ASH Wednesday 2021 has been described as “red-letter day” in Trinidad and Tobago as the first set of Covid-19 vaccines will be given to high-risk healthcare workers. This according to Minister of Health Terrence Deyalsingh at a virtual media conference of his ministry on Wednesday, the day after what would have […]Read More

THE Ministry of Health is now focusing on controlling the Covid-19 virus from a position of managing it. This was revealed by Minister of Health Terrence Deyalsingh at the virtual news conference on Wednesday. He said, “For the past year we have been managing the disease by closing borders, by physical barriers like masking, […]Read More

NO new Covid-19 protocols will be put in place despite the fast spreading UK variant B117 being discovered in Trinidad and Tobago. This according to Minister of Health Terrence Deyalsingh at a virtual presser called on Friday to discuss the latest on Covid-19 in the country. Deyalsingh urged the country to remain vigilant to […]Read More

By Prior Beharry IN the initial phase of Covid-19 vaccination in Trinidad and Tobago, 25,000 people will receive the jabs. This according to Health Minister Terrence Deyalsingh at the first virtual presser for 2021 on Monday. He said the government will be asking for 50,000 vaccines for 25,000 citizens since vaccination included two injections. “Our […]Read More

By Sue-Ann Wayow TRINIDAD and Tobago still does not know what type of Covid-19 vaccine the country will be receiving says Health Minister Terrance Deyalsingh. But regardless of type, the country will be in a state of readiness to receive them by March. “Not knowing which vaccine we are going to get does not […]Read More

By Prior Beharry THE Hindu community has been praised by Minister of Health Terence Deyalsingh for the way in which it celebrated Divali during the time of Covid-19. He made the comment at the virtual media conference of his ministry on Saturday. Deyalsingh said before Divali was celebrated on November 14 he had reached […]Read More

ODAI Ramischand, the lawyer who lambasted Health Minister Terrance Deyalsingh and the Trinidad and Tobago Police Service (TTPS) for publicising his daughter’s beach video has apologised. In a long post on Facebook, the same platform that he used to condemn the minister and the TTPS, Ramischand stated that he was sorry for the […]Read More

Kamla Calls on Women to Stand Up