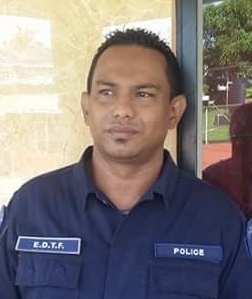 A police officer attached to the Matelot Police Station is found unresponsive in his bed on Monday morning.

Police said the body of PC Jesse Ramroop, 37, bore not marks of violence.

His wife Janelle she told police that he went to bed around 10.30 pm on Sunday at their Cunapo Southern Road, Navet Village, Rio Claro, home.

She awoke around 6.30am on Monday and on attempting to wake him, he did not respond and appeared to be lifeless.

The wife called for assistance and her brother Damien Lezama, 38, a ship captain and trained paramedic, attempted to resuscitate Ramroop without success. Lezama lived with them.

A report was made to Rio Claro Police.

Acting Inspector Ragbir and a party of officers responded.

Police Commissioner Gary Griffith has extended condolences to the family.

An autopsy will be performed on Ramroop’s body.

No Carnival 2021, but Patriotic is Ole Mas – Moonilal