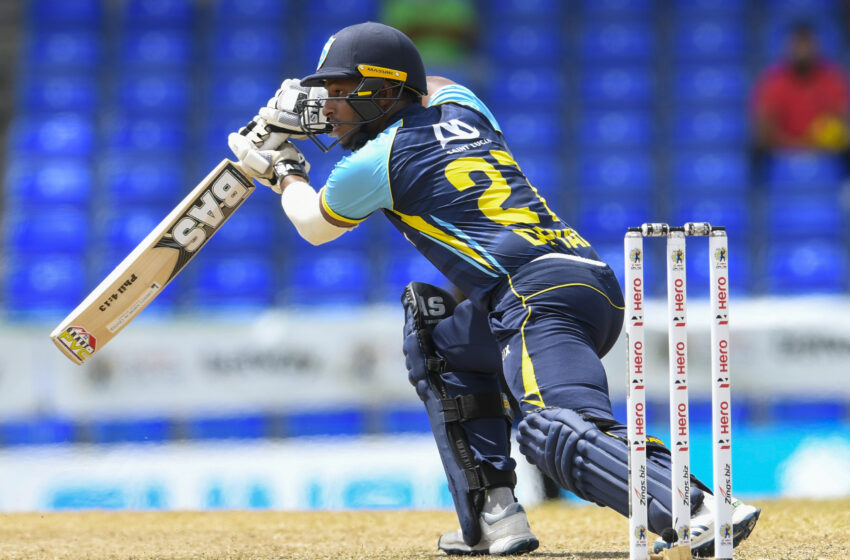 Mark Deyal of Saint Lucia Kings hits a four on his way to a top score of 78. CPL T20/Getty Images

The Saint Lucia Kings won the toss and chose to bat. Mark Deyal got the side off to a flying start and they maintained a high intensity throughout the innings, as Tim David and David Wiese combined to cause carnage in the latter overs, taking the side to a mammoth 205/4 after their 20 overs.

TKR got off to a fast start in response but slowly unravelled amidst a growing run rate, as Wiese took his second five wicket haul of this year’s Hero CPL to end their title defence as they finished on 184 all out .

Kings had got off to a troublesome start as Rahkeem Cornwall was caught out in the first over. Yet Deyal would come in and play with an attacking intent that saw him launch 11 boundaries and reach his highest ever T20 score, 78 off just 44 balls.

Roston Chase would aid the side with a valuable knock, before David and Wiese came in and formed a destructive partnership –  75 runs coming off the last 34 balls. Despite the high score, Sunil Narine was excellent with the ball for TKR, conceding a paltry twelve runs from his four overs.

TKR responded with a strong start, scoring 66 runs in the power play for just the loss of one wicket, as Narine and Colin Munro kept the required run rate within reach. However, Wiese starred with the ball as he took both of their wickets, adding pressure to the chase.

Despite quick-fire cameos from Darren Bravo and captain Kieron Pollard, it was not enough as the champions faltered under disciplined bowling from Alzarri Joseph and Wahab Riaz. Wiese then capped off a superb game by taking late wickets to reach his five wicket haul.

Saint Lucia Kings reached their second successive Hero CPL final with the win and the result means we will have a new champion this year.

The Guyana Amazon Warriors play St Kitts and Nevis Patriots in the other semis at the same venue for a place in the finals against the Kings on Wednesday.

A Look at Life During Curfew in T&T